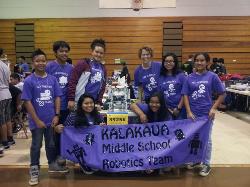 Last Saturday, 11/2 our VEX Robotics team competed in the Mililani VEX tournament. Our students made much gains and had vast amounts of accomplishments. They improved in everything from the autonomous mode being able to score and win to communicating with each other as well as with other teams as they scouted. To see their growth and also their bright smiles was just awesome! They were proud of themselves and each other. The team came together as a team and were extremely successful with accomplishing their goals.

The robot had to be inspected the night before, and our robot was still just a little too big to pass the 18 x 18 x 18 size requirement. Jhansen thought outside the box and decided to change the size of the intake gears for the robot to pass inspection. Woo hoo!!! It was a successful change and our robot finally was able to be inspected around 7:30. Phew! Next, Wilson practiced the autonomous mode to make sure he knew the exact positing of the robot. Again, it was successful. Woo hoo! Headed back home in a downpour, but thought the kids needed some food, so went through Burger King drive-thru - bad idea!!! :( Downpour = lots and lots of rain!!! Well, it was also downpouring in my car! Oh nelly!! Drive-thru - what a bad idea, but the kids got a good few laughs out of it! :)

The next morning started nice and early. Rochelle (a.k.a rock star) helped drive students out to Mililani before she had to go to work! Thank you soooooooooo much!!! We go there bright and early to allow the students to practice the autonomous mode again and also driving. As I said earlier, the team made leaps and bounds at this tournament. The students were able to score in the high goals, they were able to de-score the large balls, and were even almost successful in scoring a large ball on top of the high goal. The students strategized well with their alliances as well as with each other. Tenielle did an awesome job of coaching during the matches, and Jhansen and Wilson's driving skills improved.

Our team was on the 8th alliance for the elimination rounds and went up against the 1st alliance team. During our team's match, they played excellent defense and offense. Jhansen was able to de-score throughout the entire match allowing the final score to result in a tie 44-44!!! Woo hoo!!! Unfortunately the 1st alliance team did eventually prevail and they moved onto the semifinals, but our team truly improved and made me proud!! They represented Kalakaua Middle School well!!!

Our next competition will be next month, Dec. 13 and 14 at Stevenson Middle School. I'll send more info once the tournament gets closer. Thanks again for all your support.

I would like to thank Rochelle for helping drive our students to the competition and back to school after she finished work. Big mahalo to Marie Domingo - thanks for always feeding our students. We enjoyed the chips and water. Thanks for coming out to show your support, plus bring tacos for lunch!!! :) Finally, thank you so much Ms. Aiwohi for making it out to our competition to show your support. The students are truly grateful to receive so much support from our school.