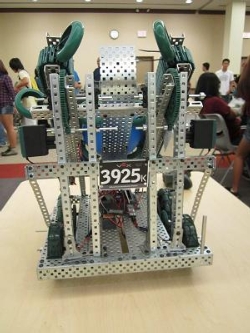 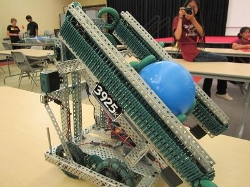 This past weekend our VEX Robotics team participated at the HCES Pearlridge VEX Competition. There were a total of 18 middle school and high school teams from Oahu and Big Island. Since there were only 18 teams, each team participated in the alliance double elimination rounds. Throughout the competition, our robot had some technical issues. The issue might be with our robot's brain, so we were unable to fix the problem.
However, our team showed great perseverance as they did not give up when their robot would stop during the match. They waited a few seconds, and then tried to drive the robot again. Woo hoo!!! Their perseverance paid off! Our robotics team was able to score an average of 10 goals each game.
Our VEX robotics season is officially over. The new game will be introduced this coming April. The students are excited to start building in April and working throughout the summer! I'm very proud of our team, especially since this was their first year.
I would like to thank the following people for coming and showing support for our team.
Thanks, Mrs. Karasaki, for coming and for the delicious candy. Thank you, Ms. Domingo, for your support and being a wonderful photographer! Thank you, Ms. Obamos, for coming and for the Angry Bird mascots. Thank you Mrs. Ishikawa for coming and for the Zombie!!!
Michelle Kay
VEX Robotics Adviser
Robotics Team
Matthew Dufale, Jerry Killion, Janine Mabuti
Click here <<< to see pics of the event!