KMS made it to the VEX Robotics FINALS!!! 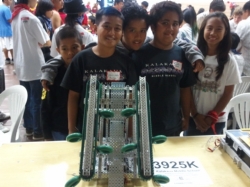 Last Friday, 11/11/11, Kalakaua Middle School’s first ever VEX robotics team competed in the Oahu East VEX Robotics Competition at Iolani School. There were 36 public and private middle and high schools from all over the Islands that competed.  (KMS VEX Robotics team comprised of 6th and 7th graders pictured to the right)
First the 36 teams compete in the qualification rounds, 5 matches each. VEX robotics is a team effort where each team is on an alliance with a team from a different school. The alliances are not known until the day of the competition. During one match, our team was on the alliance with Iolani versus Farrington and Dole Middle. Our alliance won the match because of the excellent defensive strategy of our Kalakaua Middle team of blocking Farrington’s last move to score. Woo hoo!!!
After the qualification rounds, the top 8 teams pick 2 teams for their alliances to compete. Our team, 3925K, was selected by Waialua Intermediate and 808 Robotics team (an independent robotics team composing of mostly home schooled students and some private school students). The elimination rounds are double elimination; thus, each team on the alliance has to play at least once. Our team was seated 6 and had to compete against the 3rd seated team. Waialua and 808 Robotics competed against the other alliance first. We won the first match, and then Kalakaua and 808 Robotics competed against the other alliance and won! It was off to the semifinals!!!!
Our alliance then was matched up against the 2nd seated team, and yes, we won both matches! Now it was the finals. Whichever team won the final matches would automatically qualify to go to the Worlds VEX Competition at Disneyland in April. The final match was the 1st seated team against our 6th seated team. The 1st seated team was composed of McKinley High School, Iolani High School, and I think another private high school. The first match was close 25-23 and the second match was just as close, 23-21. Unfortunately we did not win either match; however, our students represented Kalakaua Middle School extremely well. Not only did our team take home a trophy for being one of the tournament’s finalist, we also took home the judge’s Innovative Award! Again, we cannot stress enough how awesome our students were at this competition. They showed great teamwork, sportsmanship, and just pure awesomeness!!!
Our VEX robotics season did not begin until late Sept., and we were unsure if we were even going to be ready for this November competition. We were definitely proven wrong! Our next competition will be Dec. 1, 2, and 3 for the Pan Pacific VEX Championship Competition at the Honolulu Convention Center where there will be over 75 teams from all over Hawaii, California, Nevada, and even China.  We know our students will do just as well at this upcoming competition because they have the drive to work as a team and to continue to improve each match and each day.
A SPECIAL THANK YOU goes out to Farrington High School and their robotics team. They have been an enormous asset to our team with mentoring our students.
To learn more about VEX, please visit: vexrobotics.com.
Thank you for reading about our VEX robotics team!