Our school was named after King David La'amea Kamanakapu'u Mahinulani Nalaiaehuokalani Lumialani Kalakaua, the last king of Hawaii. He was born on November 12, 1836 and died on January 20, 1891. His reign over the Hawaiian Islands was from February 12, 1874 to January 20, 1891 when he died of pneumonia in San Francisco, California.

His people called him the “Merrie Monarch”.

King David Kalakaua once said, “Hula is the language of the heart, and therefore the heartbeat of the Hawaiian people”. He couldn’t have been more right.

The Hula is a Hawaiian cultural dance that talks about the history of Hawaii, the legends and its people.

King David Kalakaua was not only a Statesman and Military Leader, but he was also a Lawyer, Inventor, Writer, and of course a Composer. He also was the first King to travel around the world and the first Hawaiian ruler to visit the United States (Mainland).

Hawai‘i Pono‘i was written by King David Kalakaua and set to music by Prof. Henry Berger, the Royal Bandmaster. It was also the anthem of both the Kingdom and the Territory of Hawaii and later became the Hawaii State Anthem (http://www.hawaiischoolreports.com/symbols/song.htm, 2006). 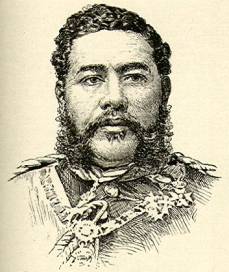 To learn more about King David Kalakaua, click on the link below: